The Biggest Choice in Life 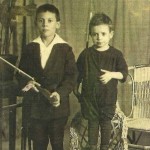 What is this “biggest choice” each of us has to make?  I won’t leave you in suspense, but don’t forget to read the rest of this post.  The biggest choice each of us has to make in life is to take responsibility for who we are and who we are becoming.  It seems many of us have forgotten that as we’ve been hurtling headlong into the future through the accelerated pace of life, thanks to technology.  Increasingly I hear blame being ascribed to almost everything and everybody for the anxiety, misfortune, discontent, and stress that is prevalent in our world today.  Yet blame only increases the hurt.  Taking responsibility removes it.

Mom’s mother came down with some sort of chronic illness (tuberculosis, maybe?) and on doctor’s orders went back to Sicily where the climate was more conducive to her recovery.  She took her two boys with her and left my mother, age six, with her father.  She would soon die in Sicily (we don’t know where) at the age of twenty-six.   My grandfather didn’t feel as if he could take care of my mother so he legally adopted her out to her childless godparents, who happened to live about half a mile away in Boston.  There she would endure treatment to which she would only vaguely allude in her adult years.  At the age of 14 she left them, and school, to work full-time as a seamstress in a garment factory. 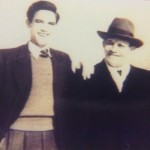 s story was similar.  His mother had been a widow with four much older children when she married Antonio Parise from Calabria.  He produced two more healthy boys, but the third child died, along with his mother, leaving my grandfather a widower, ill prepared to care for his two boys.   He farmed them out to two of the older half-sisters.  My father was twelve.  At fourteen he quit school and earned money shining shoes and running errands.  Later he would join the army and fight in WWII.

The cost of living was much less back then and both my parents were able to make reasonable livings. After the war my mother ended up working at the garment company my father ran with his brothers.  They fell in love, married, and started a family.  They were frugal and managed to raise three kids on one salary.  My maternal grandfather’s untimely deal enabled them to put a down-payment on a house in the suburbs, which cost thirteen thousand dollars back in1956.

My father had always wanted to be a lawyer.  My mother could have become a psychotherapist.  Instead they eventually earned their GED (general education development) diplomas in their forties, but never went to college.  Instead they took responsibility for raising three children, who cumulatively would earn eight degrees beyond high school.  They learned early in life not to dwell on “what could have been” and instead made conscious choices to be all they could be in this moment.

Through them I learned that no one owes me a living. I am happy to receive whatever help in justice may be offered, but I need to pay my own way in life.  I also learned that God is not a magician who “makes things happen” but that we, ourselves, make things happen with the right intention and focus.  In the end the choices I make in good conscience lead me to the next good thing in my life.  Nothing more, nothing less.

I’ve also discovered that I am here to take responsibility for my life for only one reason: to make the lives of others a little better.  The goal of all that I do and am needs to be for the common good. Distractions such as power, wealth, and influence, however useful, must be subservient to that one goal.