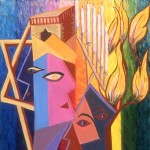 I usually think of survival as being on the absolute lowest rung of life.  Survival for me conjures images of the barely clothed, emaciated bodies of those liberated from the Nazi death camps after WWII.  Something in their spirit and will to live enabled them survive through one of the most horrific examples of man’s inhumanity to man.  There are too many contemporary examples of survival to consider, not least of which are those associated with today’s natural disasters and wars.

I don’t think any of us ever want to get to the point of having to focus solely on surviving.  We’d like to think we have more control over our lives than that, but do we?  Perhaps I’m not appreciating fully the concept of survival.  Is survival that final “go-to” concept that most of us manage to avoid?  Or could it be that the only thing that is imperative in life is survival?

Indulge me in a little exercise.  In your mind’s eye strip away your connection to the internet, the web, and social media.  See yourself throwing your smart phone and television into a lake.  Imagine giving away all your pads, pods, cpu’s, televisions, food, and household appliances to strangers on the street.  Think of cancelling your electric, gas, water, and oil services.  Watch as you place your books, clothes, furniture, photos, and collectibles into a dumpster.  Abandon your home; junk your car; say good-bye to Fido, Sparky, and the fish.  Get in a helicopter, which will drop you into the deepest Amazon jungle.

Now what’s left?  Just you, naked, cold, hungry, alone, and unsheltered.  What’s going to happen to you now?  What is imperative in this moment?

When we strip everything away we may find that survival is actually the starting point for each of us.  This may also explain why people act as they do.  When threatened in any way we tend to default into survival mode.  We ignore all other resources we may possess and we may even act as if the end of the world is near.

This survival instinct keeps us alive and it also can cause us to mistreat those around us as we view them as interfering in some way with our survival.  Road rage anyone?  Suddenly we forget our possessions, educations, and relationships as being important in our lives and we’re reduced to the need simply to survive for the next several minutes or hours.

So the next time we are feeling:

oppressed by a bully,
haunted by an abuser,
baffled by a parent’s dysfunction,
aggravated by partner’s inconsiderate behavior,
annoyed by a child’s tantrum,
trapped by a noisy crowd in a slow subway,
or utterly gob smacked by fellow citizens’ choice for president…

we need to remember that all involved are in their own survival modes and our survival is clashing with theirs.  They are simply doing whatever they deem necessary in this moment to get to the next moment, however imperfectly.

When surviving nothing else makes a difference: power, authority, money, socio-economic standing, political philosophies, health, education…nothing.  I our survival mode we may also feel tremendous envy of others whom we think have it easier or better than we.  Not so!  The great leveler is survival; that is our first instinct.  We will often do anything at our disposal for that end.  And we don’t usually care if it’s for the good or ill of others.  As long as I survive.  Think about it.

Artwork is copyrighted by the artist Michael Parise