As I’ve previously written about my own experience of depression I thought it might be logical to write on a related topic: melancholy.  Decades ago it was often used as a synonym for depression and not much is written about it anymore.  But I think there’s a distinction between melancholy and depression.   Melancholy for me is a pensive mood I willingly enter into when I bring up memories and allow them to interrelate and telescope together with the present moment.  It’s like recalling the sweet image of Bette Davis in her 1942 film Now Voyager while watching a 2013 rerun of a much older Bette being interviewed by Johnny Carson in 1985.

My experience of melancholy goes back to my childhood when I used to walk in the forest near my home at the end of Silver Mine Road.  I used to imagine who might have worked at the mine a hundred years earlier, leaving behind large timber, now rotting in the brush.  I’d trudge down the hill to the stream that ran for a mile, noticing the rock formations, the ferns and mosses, the wild columbine, the sound of the water, and the call of the birds.  It was a respite from my high sensitivity where I could allow poignant thoughts to mix with the calm of the forest.

I still go into that forest in my mind.  What’s going on when I indulge in this pensive mood?  I’m usually not in the midst of darkness, hopelessness, or sadness as with depression.  Rather I’m enveloped in a dream-like mist, where people and events emerge and recede. 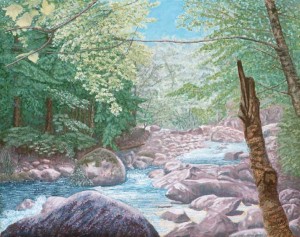 Sometimes unhappy memories come up and I get agitated or relive the anger and pain associated with them.  Other times I’m able to reframe them with new information and a more positive perspective.  I can bring up the past in a wistful, ironic way, pondering what might have been or could have been.  I can also appreciate my courage or inner resolve that I was able to muster that led to the good results I now enjoy in life.  My only concern is not to indulge in melancholy so long that I become distracted or so intensely that I ponder myself into a funk.

Melancholy is also an expansive outlet for my empathy.  This morning I went out onto my patio to eat my oatmeal and banana in the cooler morning air.  I noticed a creature clinging to the pedestal that holds the silver gazing ball in my hosta garden.  It was a cicada, one of those noisy summer creatures that emerge in several-year cycles.   It had recently shed its big-bug exoskeleton, which was stuck, dried and empty nearby.  The insect had grown an enormous pair of wings ready to live out its reproductive life phase.

As it was unable to fly as yet I picked up the creature.  Its long legs were tucked under and its wings were strong and almost transparent.  I reflected on its very short life cycle, hatching underground, crawling out of the earth, and then feeding and waiting for this transformation.  I wondered when it would find its mate to continue the circle of life and then die.  Or would a bird swoop down and devour it as a meal for her babies?

In my melancholic reverie I saw this impressive creature as a metaphor.  It symbolized transience, the transformation of life, the certainty of death, the oneness of all creation, and universal consciousness as it perched in my yard alongside me.  Melancholy helps me to stop and sort out my relationship with the rest of creation.  It is a respite from the mundane such as what to cook for lunch or why I ate that red bell pepper aioli the previous night, giving me a stomach ache.  It’s a means to transcendence, to taking a meta-view of my world, and to indulging in a mind-comforting moment during a busy day.

How do your melancholic moments assist you in balancing your life?  How does your spirit feel nourished by a melancholic reverie, where the only goal is to sort through some random thoughts, to relive pleasant experiences, or to reframe unpleasant ones?  Is it time to take some time for your inner life?

Have you considered a life coach?  Let’s discuss it further:  michael@parisecoaching.com .